(New York, NY) — Today, New York City Comptroller Scott M. Stringer unveiled a report that establishes the true scope of New York City’s affordable housing crisis, and reveals that the City’s current plan is not reaching those most at risk. NYC for All: The Housing We Need, finds that roughly 580,000 New York City households are in the greatest need of affordable housing.  These households – almost 90% of whom make less than $47,000 per year for a family of three – are paying over half of their incomes to rent, bunking in overcrowded apartments or have been living in homeless shelters for more than a year – yet less than 25% of the City’s current affordable housing plan is being built for these New Yorkers.  Comptroller Stringer’s proposal includes new strategies that will help build targeted, truly affordable housing for those most at risk.  It also finally connects the City’s housing policy to its rising homelessness crisis by tripling the homeless set-aside to 15% for new construction and planning to meet that goal each year.  To finance the proposal, the Comptroller is calling for the elimination of favorable tax treatment currently enjoyed by all-cash homebuyers and reducing unfair, outdated taxes on middle class New Yorkers who borrow to purchase a home.

“We are in the middle of a serious housing affordability crisis in this city and we cannot let a $2 million condo become the cost of entry.  This crisis is having the greatest effect on the people who are the backbone of New York City – like home health aides, childcare workers, taxi drivers, and so many others – and we’re failing them.  We have to face this crisis head on and build units for people with the greatest need.  This isn’t our first housing crisis, and in the past, the City put effective plans in place to meet those challenges – today we need real solutions to face the real need,” said Comptroller Stringer.  “Our proposal not only provides new units for some of the lowest income households and sets aside more housing for homeless families, it funds it through a new and progressive tax overhaul that makes it easier for middle class families to purchase a home.”

To effectively address the growing housing crisis and rising rates of homelessness, resources must be refocused to New Yorkers in the greatest need. 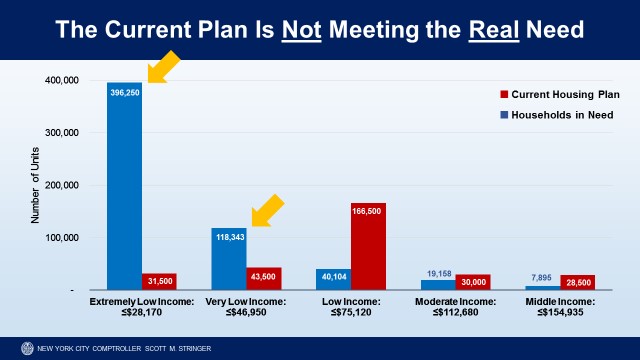 Comptroller Stringer’s “NYC for All” proposal eliminates the Mortgage Recording Tax entirely.  Instead, it treats all transactions equally, regardless of how a home is purchased, implementing a single progressive Real Property Transfer Tax that rises as the price of the property rises.

The tax proposed in “NYC for All” will save the average middle class New Yorker over $5,700 on a purchase or refinancing.  It would also raise up to $400 million annually, providing the resources to finance more deeply affordable housing and reduce homelessness. 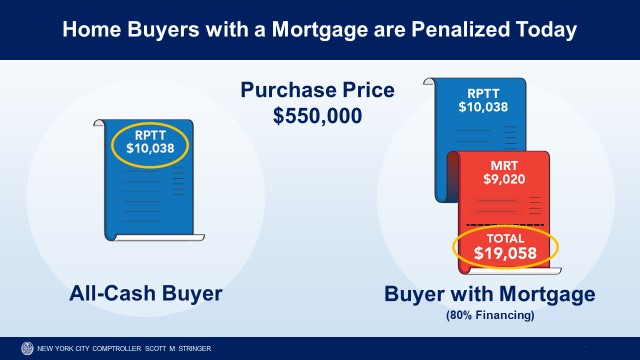 The City Should Create a Land Bank to Use City Owned Properties for Permanently Affordable Housing.

As a starting point, Comptroller Stringer renews his call for the creation of a dedicated New York City Land Bank/Land Trust – an idea he first proposed in a February 2016 report, Building An Affordable Future – to help jumpstart the development of affordable housing on hundreds of vacant lots owned by the City.  There are already some 25 land banks across the state working to proactively take control and develop abandoned properties.

The Comptroller’s Office estimates that the City could build at least 20,000 new, deeply affordable units on vacant lots owned by the City, but first the City Council must act to pass existing legislation to create a New York City Land Bank. The legislation, first proposed in 2015, would create a land bank for New York City “tasked with acquiring, warehousing and transferring real property to develop, rehabilitate and preserve affordable housing.”

“The Community Service Society’s 2018 Unheard Third survey reveals the wide extent of housing hardships among low-income New Yorkers, which force families to make difficult trade-offs and are often precursors of homelessness,” said David R. Jones, Community Service Society President and CEO. “However, the bulk of new units built under the City’s housing plan is out of reach for those New Yorkers under the most pressure. As the first serious proposal recognizing the need for operating subsidies in affordable housing, Comptroller Scott Stringer’s plan would go a long way toward filling a much-needed funding gap to help target housing to families that need it most.”

“New York’s affordable housing crisis grows more dire by the minute and New Yorkers need bold action from the City immediately to stay in their homes,” said Judith Goldiner, Attorney-In-Charge of the Civil Law Reform Unit at The Legal Aid Society. “Today’s report released by Comptroller Stringer details concrete steps that City Hall could implement tomorrow to effectively address this issue. Eradicating homelessness and improving affordable housing options for our clients is paramount. We look forward to putting these proposals into practice.”

“Our housing crisis is forcing hundreds of thousands of New Yorkers to make impossible sacrifices just to keep a roof over their heads. The City’s current housing plan has failed low-income New Yorkers and is nothing more than a gentrification plan,” said Jonathan Westin, Executive Director of New York Communities for Change. “Comptroller Stringer has a real proposal to address our city’s affordable housing crisis. We need immediate action to provide housing for those who need it most – New Yorkers have waited long enough.”

“New York City is growing more and more unaffordable every day, pushing out the people who built the communities that are now en vogue. Comptroller Stringer’s report provides data that makes the dire nature of the affordable housing crisis abundantly clear,” said Afua Atta-Mensah, Executive Director of Community Voices Heard. “We look forward to working with Comptroller Stringer to address this important matter and are glad for the leadership that this report provides.”

A Conservative Politician with Uncompromising Religious...

I Ran for President in Cameroon. Here is What I Learnt.

I Ran for President in Cameroon. Here is What I Learnt (by Akere T. Muna) President...

U.S. Hands Over $4 Million in New Medical Equipment and...

The project will also train Ethiopian health center staff on how to properly use...

Yes. Israel should refuse entry to anyone who supports BDS
25 %
No. Regardless of their positions, as members of Congress, they must be allowed to visit Israel like all others members.
37.5 %
Yes. because their trip was for a propaganda purpose only.
0 %
No. They have the right to visit places of their preferences and meet whomever they need to meet while they are there.
37.5 %
I don't care about this issue at all. It doesn't concern me.
0 %

Yes. I don't think the president colluded with Russia or obstructed justice.
29.4 %
I support the report's position on collusion, but I still think there is obstruction of justice
29.4 %
No. I think there were collusion and obstruction.
35.3 %
No. I think democrats should proceed with more investigations.
0 %
It does not matter anymore. Congress must move on to other issues.
5.9 %
I did not follow this issue and do not care one way or another.
0 %

I would offer tax incentives for health food stores like Wholefoods to move to the area (preferably the 365 economy chain).
11.9 %
I would take steps to improve security in Parkchester.
11.9 %
I would offer more senior services, and host year-round events in the Oval.
2.4 %
I would offer resources to entrepreneurs and would-be entrepreneurs in Parkchester.
14.3 %
I would open a multiservice community center with services for children (tutoring, counseling, etc.) and adults (resume writing assistance, legal services, letter writing assistance, health seminars, skill building courses, etc.).
59.5 %