The Alliance of Yemeni American Businesses was created by the owners of the convenience stores in many neighborhoods across the city. Mr. Yahay Obeid a leader in the Yemen-American community, and whose family owned a store was one of six people who founded the Alliance of Yemini American businesses, and Mr. Obeid serves as President of the organization.

The AYAB will help the individual Yemeni-American business owners, and others in many ways offering management advice, product availability, store set up or renovation of current stores, and are working on making available a different much more cost efficient non cash system. AYAB is located at 1626 Bronxdale Avenue in the Morris Park section of the Bronx. 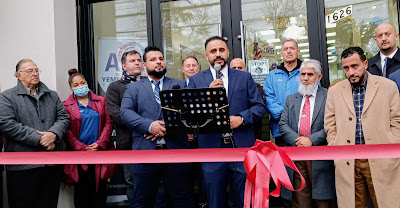 Mr. Yahay Obeid Speaking is flanked L - R by the Community Board 11 Chair, A representative of the Bronx District Attorney's Office, The head of the Allerton International Merchants Association, Leaders of the Yemini-American community and others behind him. 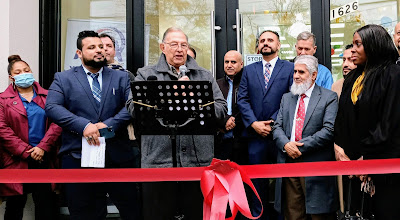 Bronx Community Board 11 Chair Mr. Al D'Angelo welcomes the new AYAB office to his community board area, where Mr. Yahay Obeid is also the Vice-Chair of CB 11. He also thanked the Yemini community for their help in Morris Park Columbus Day Parade. 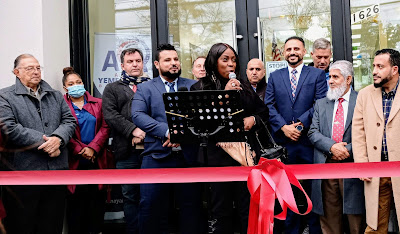 Bronx Borough Elect Vanessa Gibson pledged her support to AYAB in helping the many store owners throughout the Bronx who are struggling to make a living for their families. 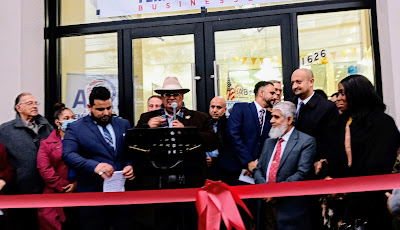 Shabbir Gul President of the Bronx Community Council, and a leader in the Bronx Muslim community wishes AYAB good luck in the new venture to aid Muslim small businesses. 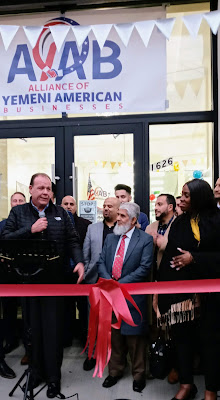 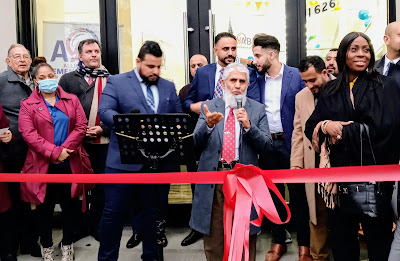 Dr. Hamkd Al Silwi, Iman of the Bronx Muslim Center say a prayer before the ribbon is cut to open the Alliance of Yemeni American Businesses.

Holding scissors on the left are Mr. Fathi Alyla, President of the Yemen Community, the Yemen Ambassador to the United Nations, and Councilman Mark Gjonaj. On the right, Bronx Borough President Elect Vanessa Gibson and Camelia Tepelus Executive Director of the Morris Park BID.

Get Ready for the Unexpected with a Disaster Go Bag

This year proved to be the most difficult in my seven years...

New York Council member Vanessa Gibson has confessed that 2020 is the most challenging...

Africa is an Extremely Important Market for South Africa

Minister Davies was speaking at the launch of the South African pavilion in Cairo,...

UN and African Union in ‘Common Battle’ for Development...

The UN chief emphasised the “alignment” between the UN’s and African Union’s respective...

The passing of the Jose Peralta DREAM Act ensures that every student in New York...

No. We have to wait until the investigations complete and the findings are impeachable.
27.8 %
No. Not until the due process is exhausted and he is found to be impeachable.
16.7 %
No. No impeachment period. Let him finish this term and let the voters decide his political fate.
41.7 %
Yes. He should resign now. he can no longer be an effective governor.
5.6 %
Yes. He should resign now because he lost the confidence of the public.
2.8 %
Yes. There are too many allegations against him.
5.6 %
I have no opinion on this matter.
0 %