Friday was the Black Health and Black Wellness event at Lincoln Hospital which was attended by Bronx Borough President Vanessa Gibson, and also by Mayor Eric Adams. There was an introduction by Lincoln Hospital CEO Christopher Roker on screen of how Lincoln Hospital now has a new Red Carpet approach to the patients who come to the hospital.

Bronx Borough President Vanessa Gibson spoke saying in celebrating her ancestors, she has made history as the first Black Female Bronx Borough President. She went on to say that we must prepare the next generation of Black people to continue further. This is a reminder of what we have overcome, but as Mayor Eric Adams says 'We have to get stuff done'.

Mayor Eric Adams then said, there were 109 mayors before him, but he is the first mayor to understand the needs of the Black people of New York City. When people tell you to go back to your own country, to tell them to go back to theirs. He then mentioned the problems that many ethnic cultures had when they came to America. He wants to lead to a better moment for the city, it is an American dream.

After the mayor and Bronx BP left there was a panel discussion on building a better, healthier community in mind and body through Healthy Lifestyles. Eight people on the panel lead by Doctor Watkins, a mental health expert who spoke of the stress of the past two years of the Pandemic. Sheikh Musa Drammah is the creator of the Healthy Lifestyles program that is being introduced into the public school system, that will teach children to eat better, and live better. The goal is to become a better and healthier Bronx, and not the first in all bad things, while being last in all good things. Other panel members gave their own experience of a healthier lifestyle, be it a community vegetable garden, or more green space in the concrete buildings. 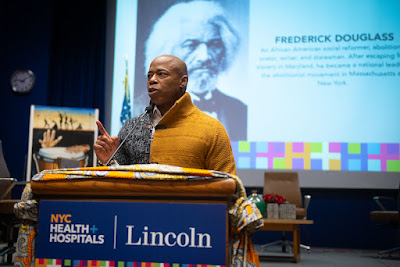 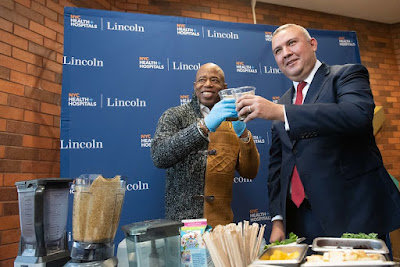 Before leaving Lincoln Hospital Mayor Adams had a healthy drink.

Both photos are courtesy of the mayor's office. 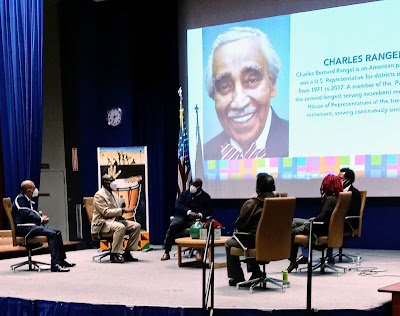 A Pedestrian was struck on Zerega Avenue today

BLINDFOLD LAW HAS BEEN REPEALED

They avoid personal and environmental choices that can interfere with achieving...

Acute Violence and Lack of Protection Suffered by Civilians...

MSF’s report describes the events of November 2018, the consequences of the events,...

African economies continue to rely heavily on taxes on goods and services, which...

Over the past five years, immunization coverage in sub-Saharan Africa has stagnated...

Taking the Fight to the Virus, Step 1: Rapid Turn-Around...

No. We have to wait until the investigations complete and the findings are impeachable.
26.3 %
No. Not until the due process is exhausted and he is found to be impeachable.
15.8 %
No. No impeachment period. Let him finish this term and let the voters decide his political fate.
42.1 %
Yes. He should resign now. he can no longer be an effective governor.
5.3 %
Yes. He should resign now because he lost the confidence of the public.
2.6 %
Yes. There are too many allegations against him.
7.9 %
I have no opinion on this matter.
0 %

I would offer tax incentives for health food stores like Wholefoods to move to the area (preferably the 365 economy chain).
13.2 %
I would take steps to improve security in Parkchester.
15.8 %
I would offer more senior services, and host year-round events in the Oval.
2.6 %
I would offer resources to entrepreneurs and would-be entrepreneurs in Parkchester.
11.8 %
I would open a multiservice community center with services for children (tutoring, counseling, etc.) and adults (resume writing assistance, legal services, letter writing assistance, health seminars, skill building courses, etc.).
56.6 %